We aren't without references, but it is more than having a fistful of numbers. Adjustments for comparisons across conferences are needed (Cincinnati would have more viewers in the B1G than the AAC), and leeway for similar programs should be used rather than looking at it as an exact ranking (because you can't account for everything). You can't get a reliable hard ranking, but you can get a good idea of who are really candidates, and a rough idea of their relative rankings. 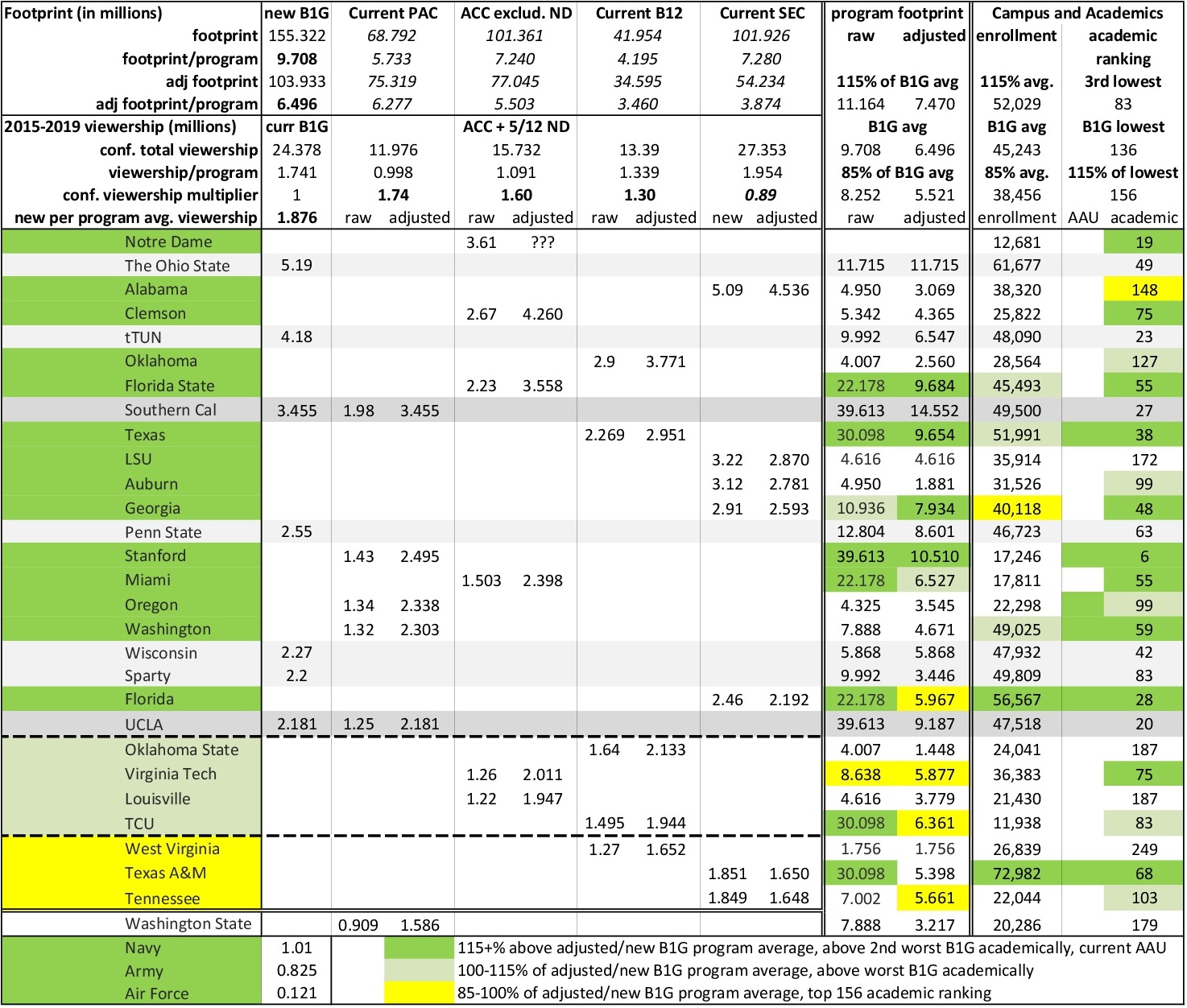 I split out looking at each candidate's viability closer (this is just a starting point), including a few longshots, in Part 2 and 3. This details the reference. B1G Expansion Candidates Part 2 - The Big(ish) Dogs looked at the candidates notably above the B1G average. Part 3 will look at the marginal and longshot programs.

This is my starting point. More than a view of broadcast revenue, it reflects the fan base size, and the broader NCAAF fan interest in the program.

To approach a useful cross conference comparison, major variations need to be diminished. Not all conferences get the same broadcast coverage. A large part of the viewership comes from fans of other programs in the same conference, while top brands attract nationwide interest.

The starting point for a full adjustment would be a relatively constant number (such as programs reliable fan base), and variable numbers based on the program's brand (ability to attract attention outside their own fans). Without access to raw data, a reasonably close estimate might be arrived at using successive approximation. If you think I did this, you would be wrong, successive approximation is a pain in the ass to pull off.

I was really only interested in a narrow band of similar programs on the margin of being expansion candidates. Others are top brands and clear candidates, or are so far below they aren't worth mentioning. The most accurate I found (in line with expectations) for the programs near the bar was to divide the candidate's conference average viewership per program by the B1G average viewership per program, capturing a sufficient part of the major differences between these programs, to create the Conference Viewership Multiplier. This was multiplied by the program's current viewership for an adjusted viewership.

For ND contribution to the ACC I only included 5/12 because they only play 5 ACC conference games, not a full slate of 8. I didn't attempt an adjusted viewership for ND in the B1G because they are an announced candidate, and I am not certain what I would use for a quick reference, though I would expect them to exceed tOSU.

This is the B1G comparison for candidates, derived using the B1G current viewership average with the adjusted viewership of USC and UCLA. In recognition this isn't an exact number, I set a generous range of about 1/3 the total (+/-15%).

I believe I gumped my way into a reasonable result. The brands well above the bar and their order is close to what you would expect, or they are close enough you would consider their viewerships about equal. UCLA ended up just over the bar. No programs like Washington State or Mississippi seem to be sticking their toes over the viewership bar for consideration. A pool of 21 candidates seems about right. I do think that the result might be skewed against TA&M and Tennessee, the likely result of a sizable drop off of 25% as you transition from SEC brands garnering national attention to programs that attract little interest outside the SEC (few fans outside the SEC think the Mississippis are great programs).

This is the home state population of the candidate. It factors into their fan base size, and reflects the more dedicated fan interest in down years. For a few extremely large states, it can notably impact BTN subscription revenue if they are adding a new populous state to the B1G footprint. Excluding ND, 9 of the 20 top candidates (45%) above the bar are 85% or more of the B1G average per program, compared to 11 of 28 (39%) of the lower programs, so this is noted but given little weight.

An adjustment is needed to the Raw Program Footprint, otherwise you would place Vanderbilt on equal footing with Tennessee. This adjustment divides the candidates adjusted viewership by the adjusted viewership of all the programs in their state (% share of the state fans), and multiplies by the state population. I would expect this to be reasonably accurate if used only as a flag (programs that draw a larger following outside their state would tend to draw a larger following inside their state).

This is the reference for potential candidates, noting programs 15% above and below the B1G average. Excluding ND, 9 of the 20 top candidates (45%) above the viewership bar are 85% or more of the B1G average per program, compared to 4 of 28 (14%) of the lower programs.

This reflects the program's alumni size, the core of their most reliable fan base. It hints at the culture from the perspective of the university heads, I suspect there's a big difference between overseeing a campus of 50+K students, and a campus of 15K. It also flags programs where the alumni aren't NCAAF fans and have less interest in their alma mater's sports. 6 of the top 21 candidates (29%) have enrollment 85% or more of the B1G average, just 4 of the remaining 28 candidates (14%) meet this mark.

Alone they won't move a program from below the bar to above it, but I give closer scrutiny if a program fails to meet at least 1 of these 3 criteria. This applied to 9 of the top 21 candidates (while not all were calculated for ND).

The University heads aren't going to tarnish the B1G's academic reputation for expansion. Rather than scalar, I view it academics as a threshold: a program needs to clear the bar, how far a program goes past the bar is mostly irrelevant. I don't think it is valued enough to elevate a program that would otherwise be below the bar. It can give a glimpse into the University's culture from the President's perspective. I don't think it is set in stone, with the Universities willing to bend it a little (but not too much) for a very high candidate. I use 2 routes to clearing the academic bar:

1. AAU membership shouldn't be viewed as an absolute. The most compelling is Delany stating Nebraska's AAU membership status would have had no bearing on the Big Ten's desire to make the Huskers the league's 12th member. He stressed Nebraska's culture, viewed from the perspective of the conference and member University staffs. I view AAU membership as an easy pass past a closer look at academics.

2. University Academic Ranking can give a decent perspective, but where the bar lies is hard to say. I used the B1G worst program ranking as the bar. For trolling, West Virginia has the lowest ranking of any current P-5 member at 249th.

Only 4 of the top 21 candidates fail to at least meet the B1G 85% reference, all but 5 are ranked higher than the B1G worst, so it is rarely a deciding factor. 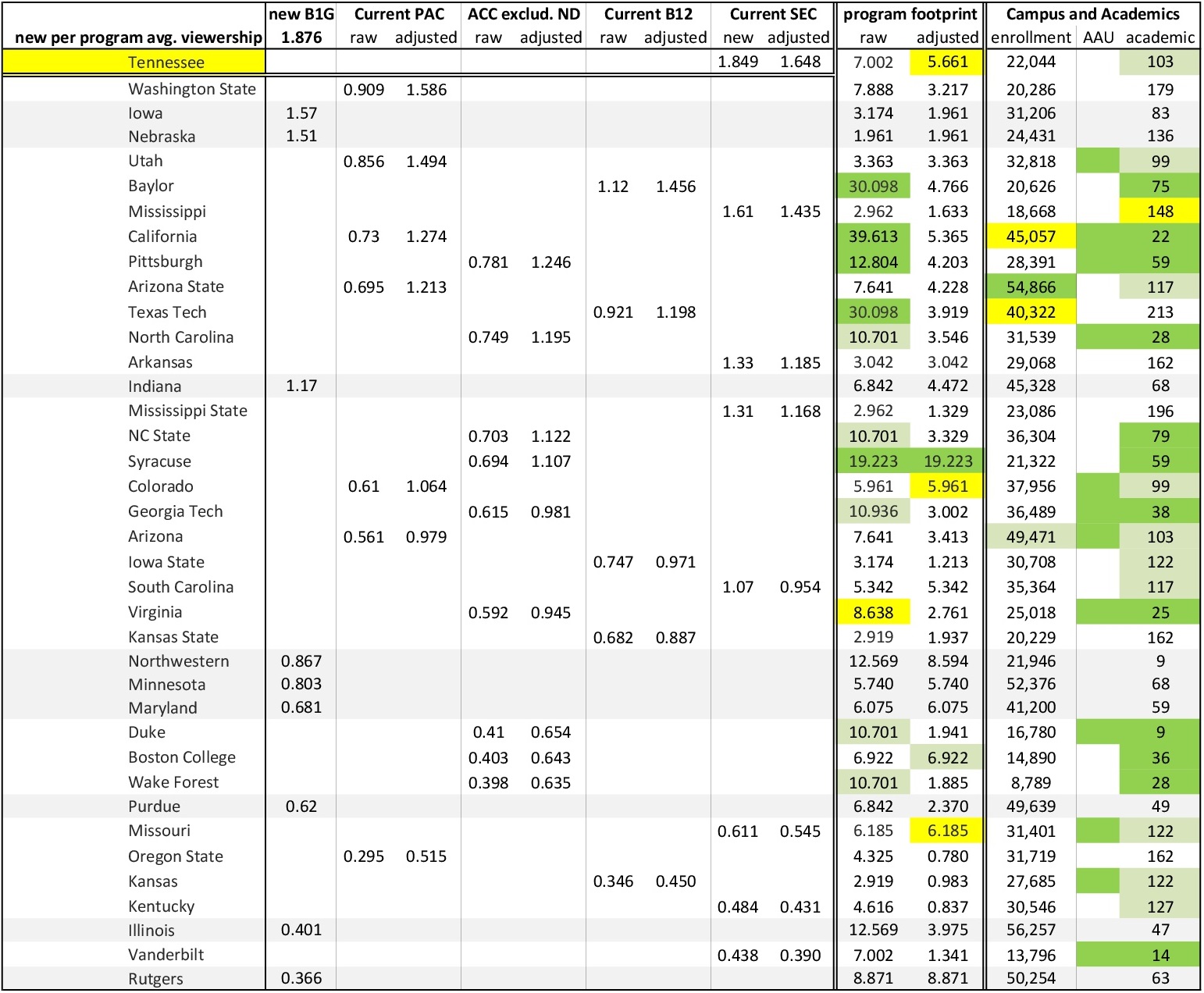 Expansion in the recent past has been hampered because the B1G had to cover the new program's shared revenue and exit fees out of their own pocket, an arrangement not only difficult for existing members, but which left the new programs unable to access higher shared revenue until they conference recouped their fees under a new contract. Fortunately the B1G is expanding just ahead of a new broadcast contract eliminating this arrangement outside the ACC - the existing members aren't penalized, and new members can access the increased shared revenue quickly.

The timing provides a means to cover the substantial ACC exit fee, with the existing B1G members able to pay the exit fee by delaying the increase in the shared revenue under a new contract by a year or 2, and recovering from the new candidate within a few years by paying them the same as they would have expected to receive in their old conference.

Estimating the increase has some potholes. An increase in the new contract to over $1 Billion a year has been used, and this was before USC and UCLA were added. Meanwhile Iowa AD Barta stated "There's talk of that (old contract) doubling... there's nowhere even near that possibility... it won't even be a sniff of that. It will be maybe a few million more for each school..." Which of these are true?

I believe both are true. The $1+B is the average per year payout of a new contract likely to span 10 years, expiring ahead of the SECs and ACCs contract. Before USC and UCLA, If the payout was increased to 103% of the previous year each year, then $1.1B a year average would average $78M a year per program, but would only be $60M per program in the 1st year. The new contract was expected to exceed $1B per year average, but from the last payout under the old contract, the 1st year increase was expected to be in the 7 figure range, conforming to Barta's comments.

I believe revenue will now likely increase closer to $10M per program per year. By delaying this increase for 2 years, the B1G programs could pay the exit fee of about 3 ACC programs. I suspect an ACC program could pay back their exit fee in their 3rd year, by taking a smaller B1G shared revenue cut equal to what they expected to receive in the ACC until the fee is repaid. If entry is spread out, they might be able to get later departures to contribute their share of early departure fees, decreasing the amount more.

This isn't as easy as it sounds for the programs. They all took a financial hit during the pandemic and need the added revenue to recover their losses.

This does flag a lot of rumors as likely false if they say the B1G is waiting. If the B1G waits until after the new broadcast contract, they lose the major revenue source the program would add, and places a strain on the conference finances. The B1G could avert this with an expansion clause, but I've seen no indication they are considering this, and not sure of the reception it would receive from broadcasters who already have the rights to B1G expansion candidates.

University Enrollment - Wiki listing for "Students" for each University