For an explanation of the table calculations and their significance, see B1G Expansion Candidates Part 1: Quantifying Candidates

For a breakdown of big dogs of NCAAF and their ranking as candidates for B1G expansion, and examples of how the data is used in evaluating candidates, reference B1G Expansion Candidates Part 2: the Big(ish) Dogs

The tables below are the reference for this discussion encompassing potential candidates on the margin of consideration, and longshots. These are programs that are less than 115% of the B1G program average in adjusted viewership.

Academics I could stop here in rejecting these programs as candidates. Oklahoma State and Louisville are ranked 51 slots below the worst B1G program. West Virginia has the lowest ranked academics among the P-5 at 249th. This also hints the B1G university heads wouldn't consider them a cultural fit.

Adjusted Viewership Oklahoma State and Louisville are projected to be above the B1G average, but by less than 15%. They might not be another mouth at the table for others to feed, but they aren't likely to give a boost in shared revenue. West Virginia is projected to be below the B1G average. In looking at West Virginia's viewership, state population, and campus size, they may have nearly maxed out their fan base interest, dependent of their opponents to provide most of the audience.

Raw Program Footprint is well below the B1G program average for all 3 of these programs.

Adjusted Program Footprint is far below 85% of the B1G program average for all 3 of these programs.

Enrollment for all 3 programs is far below 85% of the B1G average. Small enrollment is another university culture red flag.

I like to see at least 1 of these 3 (raw or adjusted footprint, enrollment) above the B1G average to provide a path for recapturing fan interest after a prolonged downturn. Not seeing any of these is a flag for closer scrutiny. I believe all 3 programs would be at risk of hitting a prolonged decline in the B1G, and never recovering.

Adjusted Viewership I think both programs are likely higher, notable exceptions to my adjustment. It could be as simple as the SEC being close enough to the B1G that no adjustment is needed. Both are generally viewed as notable NCAAF brands.

Raw Program Footprint Tennessee is just slightly smaller than the B1G program average. Of course everything is bigger in Texas.

Adjusted Program Footprint Both are likely near or above the B1G program average, diminished by the same problem causing the adjusted viewership to be skewed.

Enrollment TA&M is a massive campus, even by B1G standards, but Tennessee is notably smaller which could present a cultural issue.

Academics TA&M has AAU membership. Both have academics ranked higher than the lowest B1G program.

Side Note I was close to moving Tennessee down to marginal because of cultural issues, but there isn't a lot of comments by B1G heads to reflect their cultural view of specific SEC programs. Being recognized as a brand (even if the label is outdated), with a dedicated fan base, kept them at candidate status. If someone viewed them as marginal or a longshot, I wouldn't bother to argue.

Adjusted Viewership projected to be about the B1G average, they wouldn't likely provide a notable boost to shared revenue.

Raw program Footprint a little above the B1G average.

Adjusted Program Footprint a little below the B1G average, I would expect to be closer if the ACC brands left and Virginia fan interest faded, unless you believe the SEC is interested in UVa rumor.

Enrollment I picked 85% of the B1G average for the reference for consistency, not any hard criteria. I don't see this difference flagging any cultural or small core fan base issues.

Academics above, or at least comparable to, enough B1G universities that I wouldn't see this being a reputation or cultural issue.

Virginia Tech might be the best example of a marginal candidate across the board, a program so close to the B1G average they wouldn't bring down shared revenue, but they wouldn't increase it. The last time I recall a B1G candidate like this was Missouri when Nebraska joined the B1G... Missouri was rejected.

TCU: not a candidate

I suspect that every B12 program inquired with the B1G when Texas and Oklahoma announced they were leaving.

Adjusted viewership Projected to be a little above the B1G average.

Raw Program Footprint It's the size of Texas, Mr. President.

Enrollment TCU has the next to smallest enrollment of any P-5 program, only Wake Forest is smaller, flagging potential cultural issues.

Academics - They're Sparty and Iowa, but at least they aren't Nebraska.

I believe the B1G already evaluated TCU as a candidate and rejected their interest, so I focused instead in looking for the reason. I believe cultural issues were their downfall, lacking sufficient commonality with the B1G Universities to garner an invite. 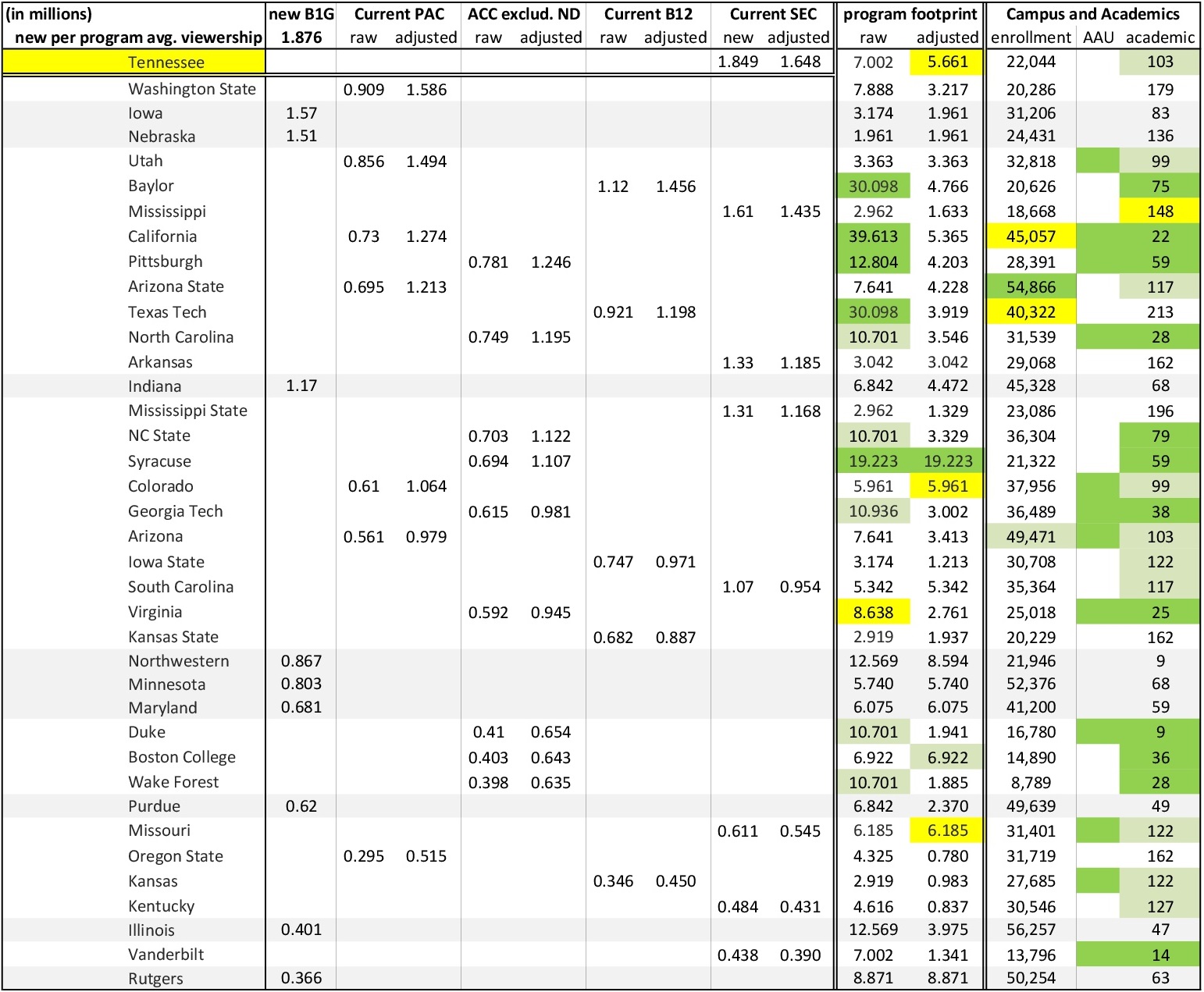 The B1G isn't dropping their academic standards for any of these programs.

Unless they're a notable brand (like ND), I don't think the B1G would invite more than 1 program from any state other than California, Texas, and Florida. These are the only 3 states with a population more than twice the B1G adjusted footprint per program (actually more than 3x), and more than 1 P-5 program in their border. Adding multiple programs from the same state splits a core part of the program's fan base.

Utah: not a candidate

I love the success Utah has had, but you would have to multiply their viewership by about 220% to reach the B1G average, and then increase some more to make an impact on shared revenue. If I am wrong on at least 1 program, I hope it's Utah.

Baylor: not a candidates

I would like to see the B1G add a program from Texas to expand the footprint from 38% to 47%, within range of over ½ the US population, but there's no sign the B1G is targeting this. Even if it was a consideration, the viewership of the 4th most popular team from Texas probably isn't going to cut it.

Mississippi: not a candidate

If you need an explanation of the reasons after all of the previous discussions, you would probably get rejected by the Nebraska undergraduate admissions office.

California: not a candidate

As big as California is, it doesn't have enough eyes to give the state's 4th program a B1G viewership.

They have all the earmarks for an invite except the most important one... nobody is watching them, not even close to all of their alumni.

Side note - When I see a P-5 program with viewership less than 20 times their enrollment, it flags to me they probably aren't even getting a lion's share of their alumni to watch their games, their viewership is mostly their opponents. Arizona and Arizona State are at 11 to 13 times.

I am extremely doubtful they are candidates, but they have appeared in a lot of rumors. This is a CYA and a flier that they might have attributes that don't show up here. Examples would be targeting a specific metro (a main reason given for adding Rutgers) coupled with established relationships between their university head and the heads of the B1G universities.

No matter how much hoopty fans would like it to be different, B1G expansion is about shared revenue, and shared revenue is about FB broadcast contracts.

Syracuse: not a candidate

They show up in discussions because they are the only P-5 program in the populous state of New York, but it has become readily apparent since long before the end of the Big East that New York state doesn't care about NCAAF, they're all about the NFL.

Being from a populous state doesn't help if everyone is watching the other in-state P-5 program(s). tOSU might have athletes and academic staff numbers comparable to Wake Forest's enrollment.

With great broadcast exposure and a conference full of brands, these program can only get 430K to 1.1M to watch. Sorry SEC, we aren't taking your problem children off your hands.

Boston College: not a candidate

Like New York, nobody in Massachusetts is following NCAAF.

Kansas: Not a candidate

You could combine Kansas and Kansas State adjusted viewership, take the higher of their other metrics, and the result still wouldn't be close to becoming a longshot status.

(*) I am leaving on the list because of their metrics, but I believe Miami and Auburn are probably not really candidates, for "Cultural" reasons. Miami is a less extreme example than TCU without as much to add as Auburn. I could include more SEC programs as well, but you can skip over them for their lack of interest anyway.

5. Texas (SEC has no interest), they were heavily pursued when Nebraska was added.

6. Alabama (SEC has no interest)

7. Oklahoma (SEC has no interest)

9. Georgia (SEC has no interest)

13. Tennessee (SEC has no interest)

B1G success has elevated the bar a LOT. If you remove the SEC and academies for their lack of interest, and 1 program I believe the B1G university head would reject for "cultural" reasons, you're left with just 10, 4 of which are marginal or longshots.

Notre Dame is unpredictable, yet highly unlikely, a contradictory description but true.

Stanford, Oregon, Washington will at least informally request to join the B1G, they aren't going down with the ship if they don't have to. If the B1G rejects them, I am curious if the SEC or ACC reaches out.

The remaining ACC candidate programs either bury themselves again and don't ask (like they did when they signed over their broadcast rights, established a ridiculous exit fee, and then signed a ridiculously long broadcast contract), are rejected because of the cost of covering their exit fee, or they don't meet the B1G requirements.