Other than near random rotations without divisions, the easiest new format for the B1G would be 2 divisions of 8 (see below). East-west is easy. It provides a fair amount of balance in fan interest (see below, teams arranged by viewership, with similar viewership grouped in the same color).

The obvious problem is that you would only play teams in the other division once every 4 years - way too little, we should target playing each other at least as often as Northwestern has a good decent not embarrassing team. This could be improved to every other year (meeting the Northwestern standard), by eliminating the body bag games and replacing them with conference games, but Athletic Directors aren't ready to give up 7 home games every year.

Whoever came up with the suckie name "pods" should never never ever be allowed to name anything again, not even their pets.

This does not have to be a multiple of 4. For example, in a 14 team conference, 2 pods of 3 rotate between 2 pods of 4 to form a division, with non-divisional games played between pods of the same size. This isn't limited to having an even number of teams in the conference; skipping playing 1 team in your division could cause a tie-breaker between teams who didn't play each other to be used, but this can occur in the below formats as well.

This could provide a decent alignment of 4 pods of 4 teams each keeping most rivals together (sorry USC and UCLA - consider being with Rutgers and Maryland part of your hazing). 2 groups would be combined to form a division.

In the initial models, the pods would rotate their groupings to share the same division once every 3 years. This was improved to switch yearly between forming divisions with 2 other pods, and playing your non-divisional games against the remaining pod, ensuring every team plays every other team at least once every other year, and you play 3 rivals yearly.

Unfortunately you reach a point where you're stuck with imbalanced pods, or fake rivals. You also don't allow for programs to have more than 3 "Rivals" (teams they play more often), Iowa has declared 4.

Pods and 3-6 are more similar than most realize. The same schedule as the above pods example could also be played as a 3+6 with no divisions, with the best 2 records advancing to the title game.

In this format, you play 3 rivals yearly, the remaining teams every other year. I was surprised this became a popular option. I would have thought most programs (particularly in the B1G west) would have thought their chances of making the CCG were better in fixed divisions, but if they would prefer an open format, I don't see Ryan Day, Jim Harbaugh, James Franklin, or Mel Tucker objecting to having to finish in the top 2 of the conference, rather than winning their division, for a shot at the CCG. Like supporting the loosening the rules for players to profit under NIL, this could become a regrettable decision for most teams.

This schedule could take a lot of different forms, including the same schedule as the sub-division (pods) shown above, but without division designations. Its ability to better balance schedules, make it more likely the best 2 programs to make the CCG, ease of expansion, and easier to implement an odd number of conference teams, makes it an improvement over pods.

It is when you start grouping rivals this format runs into problems.

What to say, Rutgers-Maryland are here to stay: nobody wants to have 22% of their conference yearly schedule set aside for teams they aren't excited to watch. I don't even think Rutgers and Maryland have developed any true rivalries yet, and we've learned in the past that the B1G attempting to manufacture rivalries doesn't work.

The next evolution we should consider is a modification to the 3+6, splitting out rivals from big games. Rivals are played yearly, big games are played 3 out of 4 years. To make it easier to understand as far as scheduling, consider:

Using Iowa as an example, rather than dropping 1 rival to only play every other year, Iowa could get Minnesota and Nebraska yearly as rivals, and Wisconsin and Northwestern 6 out of 8 years as big games. Example:

There's more possibilities to mix and match than there are ways for Nebraska to lose 1 score games, but below is 1 example of how it could look: 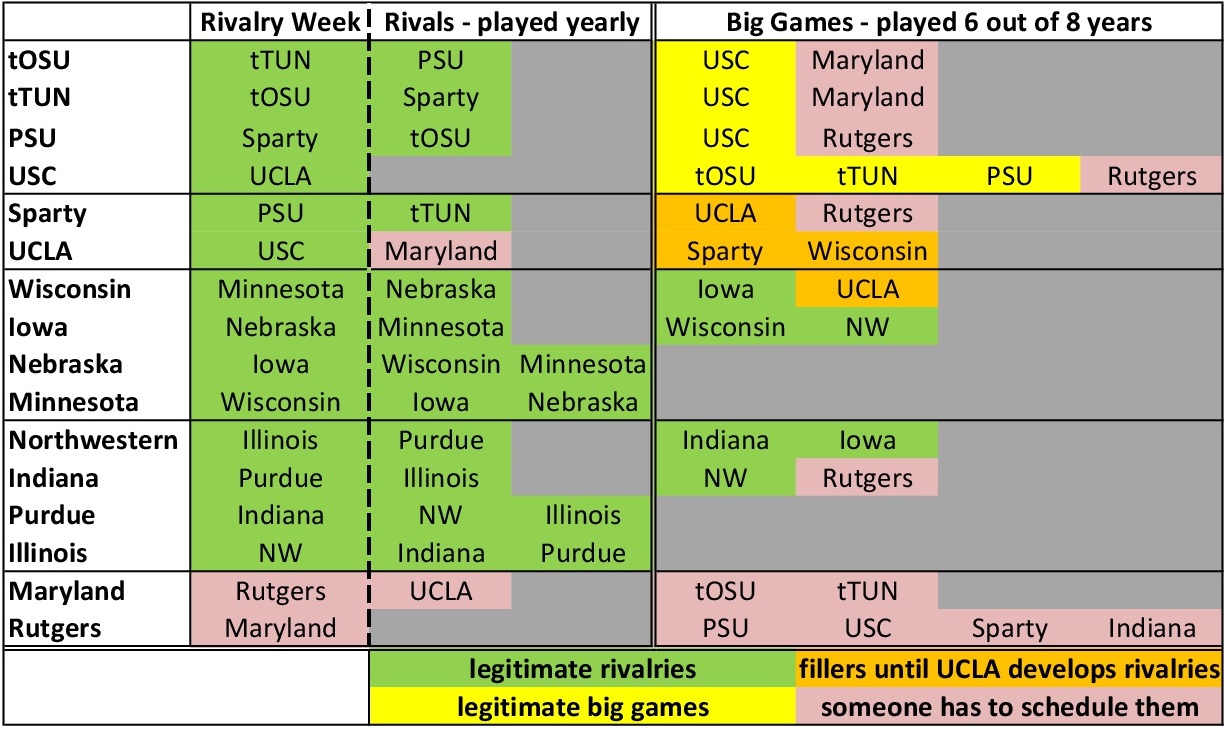 Beyond preserving rivalries, there are other gains possible in more flexible scheduling approaches. Using the above as an example:

Rutgers or Maryland can be spread out among a lot of other teams to play 6 out of 8 years instead of yearly. We can say we are hoping they develop rivalries and for alumni, but really it is because we don't want to waste a schedule spot on them yearly.

By not defining a fake 3rd rival (and in USCs case a 2nd rival), you can generate a lot of big games played 3 out of 4 years between programs with the largest draws, boosting conference interest (viewership).

When you split out the rest of the games between playing odd and even years, you can help drive season ticket revenue and network exposure utilizing your biggest draws (tOSU, tTUN, USC, PSU) by each program playing at least 2 of these 4 yearly, while having at least 1 home game. You can continue to do the same with the next tier of interest (Wisconsin, Sparty, UCLA, Iowa, Nebraska).

Teams can be grouped geographically in pairs, then split between odd and even years. This might boost interest in all of the conference teams by playing a program in each region yearly, and may even sell a few thousand more tickets to the visiting team. Example below: tTUN-Sparty, tOSU-PSU, USC-UCLA, Indiana-Purdue, Illinois-NW, Iowa-Nebraska, Wisconsin-Minnesota, and Rutgers-Maryland.

Trying to balance the schedule strength is a crap shoot, but fan interest tends to be more consistent. You can try to balance both between odd and even years when you split the pairs listed above (here viewership total was a difference of less than 10,000/year).

Prove It - Show You're Really Rivals

I expect there to be THAT athletic director(s) or fan(s), the one(s) who claims fake rivalries to help move tickets. They might have a reason, such as Illinois claiming tOSU or Minnesota claiming tTUN, but it takes more than (not) changing possession of a wooden turtle and ceramic jug to make a real rivalry, the B1G can help but Illinois ticket sales is not an issue for tOSU to fix.

To deal with THAT athletic director, make him prove it - show from TV viewership regional demographics that the 2 fan bases do have notably more interest in this game than others, prove it isn't 1 sided with the other program viewing you as little more than a road bump on their road to success, and show it isn't higher only when both teams are good.

Can’t Stay on Topic –Think Like a Ferengi: $cheduling for Profit$

Start building ratings history for the next broadcast contracts. Rivalry week is stacked with great games that can garner national interest, you can fill the remaining 9 conference game weeks with 1 game each week between the 6 biggest draws (based on viewership) (tOSU, tTUN, USC, PSU, Wisconsin, Sparty) and 1 more game. You can repeat filling the schedule each week with games between the above 6 plus the next 3 biggest draws: - UCLA, Iowa, and Nebraska. This can continue down through the conference, creating a schedule that will give broadcasters reason to pay more for higher tier selections.

If you're going to schedule a mismatch to sell tickets (such as tOSU at Rutgers or PSU at Maryland), schedule them early in the season, while there's still some interest, before the fans of the lesser team have given up on any chance of a .500 season. This would also help prop up viewership.

On the occasions they pull a major upset, they'll get a lot of exposure and accolades... for a couple of weeks. This tends to moves games between lesser programs later in the season, where most will have at least 1 team still chasing bowl eligibility, elevating the context of the game to garner more interest.

Now 4 teams will be on bye weeks at the same time. Schedule them to play each other the following week, in expected mismatches or between teams that tend to draw little interest, and allow the broadcasters to move this game up to Thursday or Friday with 2 weeks' notice. You can't make the teams better, but you can improve the context of the games by moving to Thursday or Friday to gain viewership when there are fewer games to compete with for the audience. The teams get a benefit: instead of playing games 14 then 7 days apart, they play 13 then 8, or 12 then 9 days apart.

The inventory of games to market isn't evenly spread out, with 6 or 8 games during the conference season, and around 40 home OOC games mostly spread out over 3 weeks, with a heavy lean toward MACtion and other body bag games the networks have little interest in. To increase the value of these games, extend the regular season to 14 weeks, moving 6 body bag games up 1 week and give these programs a bye week in the 1st 3 weeks. As before, you can't make the opponents better with the schedule, but you can get more interest (viewership) by increasing the context of these games.

Get the most from the time zones by having at least 1 of USC and UCLA play a home game each week. Their conference away games kick off at noon and occasionally 3:30 PM EST to get the most out of the California audience (4:00 PM and 7:30 PM PST). USC and UCLA home games can kick off at 11:30 AM and 3:00 PM PST to catch the rest of the conference during their late afternoon and night game, particularly valuable late in the season when the B1G doesn't play night games.